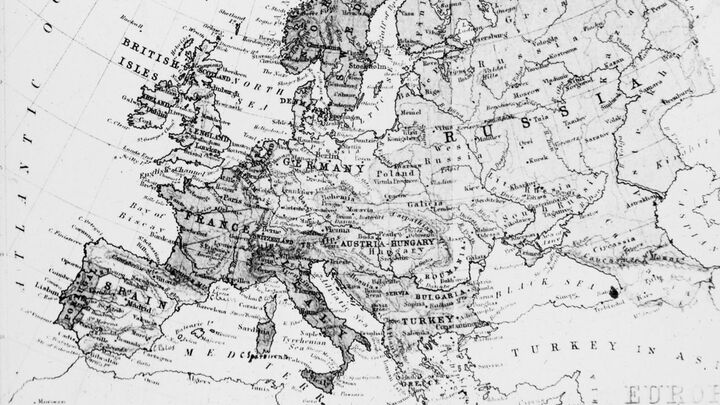 Compare Countries and Cities with OpenStreetMap and t-SNE

There are many ways to compare countries and cities and many measurements to choose from. We can see how they perform economically, or how their demographics differ, but what if we take a look at data available in OpenStreetMap? In this article, we explore just that with the help of a procedure called t-SNE.

In the previous article How to Predict Economic Indicators with OpenStreetMap, we explored how to use the amenities found in OpenStreetMap (OSM) for different countries to predict economic indicators. In this article, we will continue and take a closer look at how to use the amenity distributions to compare and cluster countries and cities. All the code used for this and the previous article can be found in this repository.

The data we are looking at consists of the number of various amenities for countries in the European Union (EU) and member states of the European free trade association (EFTA).

OSM is structured in nodes, ways, and relations, which describe the geometry. These elements of OSM can have tags giving us additional information about the geometry, which are stored as key-value pairs. We are interested in tags with the amenity key which tags different community facilities such as university, school, restaurant, atm and various others. We have selected the top 50 amenities listed in taginfo, and we have then collected the counts for these amenities within the country border for our selected countries.

This is an excerpt from our data set. In the next parallel coordinates plot, we can see all of the amenities for all of the countries.

This does not quite help us, but it gives us a rough overview of how the data is distributed. Let’s now have a look at how we can reduce the dimensionality to explore the relationship between the countries.

If you want to continue to explore the PCA, the excerpt In Depth: Principal Component Analysis by Jake VanderPlas is a great applied tutorial on PCA and Victor Powell made a great interactive guide to get a visual intuition for PCA. 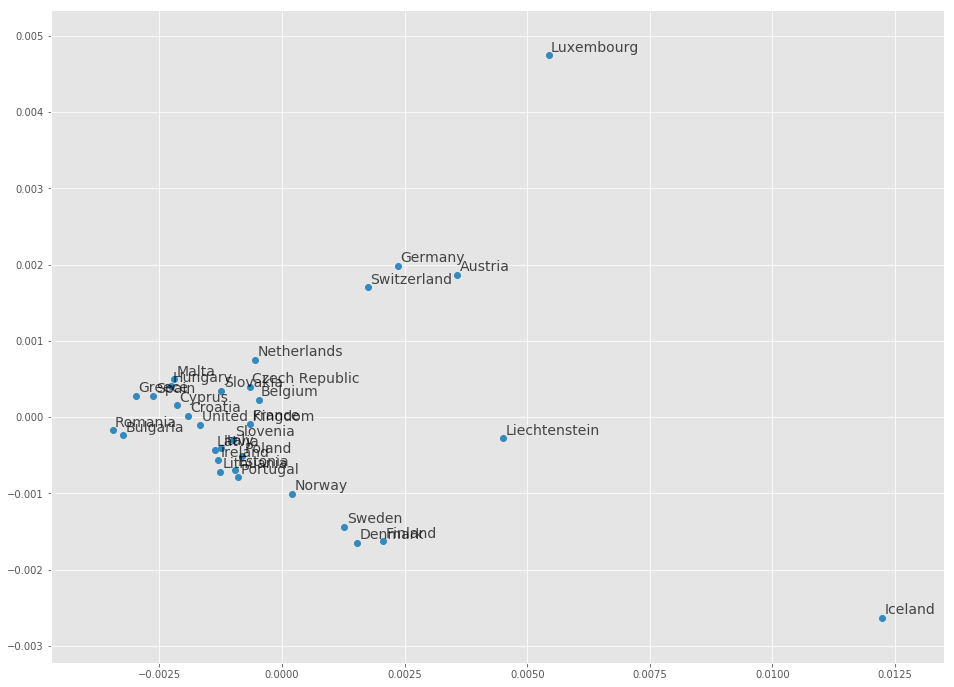 We can already see some possible relationships by the proximity of the countries like some of the Scandinavian countries or some of the German-speaking countries. We can also see some countries that are seemingly unrelated like for example Iceland.

It is important to note that PCA relies on the assumption that there are linear correlations in the data set. This makes it difficult when the data is not linearly correlated (e.g. as a donut shape, spiral shape). This leads us to a different set of procedures, namely manifold learning.

Manifold learning, also considered non-linear dimensionality reduction is an approach to reduce the dimensions of a data set which then can be used for example to visualize the data in two or three dimensions. This is done by searching for a low dimensional embedding within the high dimensional space. This can help with data compression, reverse or deal with the curse of dimensionality, de-noising, visualization and even for a reasonable distance metric within a high dimensional geometry.

A popular approach from manifold learning is the t-distributed Stochastic Neighbor Embedding (t-SNE) introduced by van der Maaten and Hinton in their paper Visualizing Data using t-SNE from 2008. It is used for embedding high-dimensional data into a low-dimensional space such as two or three dimensions. It aims to iteratively reduce the distance between similar points and increase the distance between dissimilar points.

It is important to consider and test the hyperparameters when using t-SNE. One such hyperparameter is the perplexity which balances local and global relationships in the data and is related to the number of nearest neighbors that are used. Typical values that can be explored are between 5 and 50. The other hyperparameters are the learning rate and the number of steps, which control the convergence of the algorithm.

To delve deeper into t-SNE, there is a wonderful article on How to use t-SNE effectively by Wattenberg, et al. which gives an intuitive explanation of the use of t-SNE. It is also important to note that t-SNE has been shown to be unreliable for clustering, as it does not preserve distance.

We can see again that Scandinavian countries like to be close to each other, as well as German-speaking countries. Another cluster of similar countries is formed by the Netherlands, Belgium, France and the Czech Republic. Poland, Estonia, Lithuania, Latvia, and Portugal seem to be also similar in their distribution of amenities.

There are many other nonlinear dimensionality reduction techniques, many of which are covered by scikit-learn. They also have a great introduction for the various techniques in their manifold learning section.

After comparing countries, let’s take a look if cities from two countries differ in their composition of amenities. For this, we collected the number of amenities in the same way as before on the countries, but this time we counted the amenities within each city polygon. The two countries we aim to compare are Germany and France.

Let’s take a look again at the parallel coordinates plot to get a sense of the data. 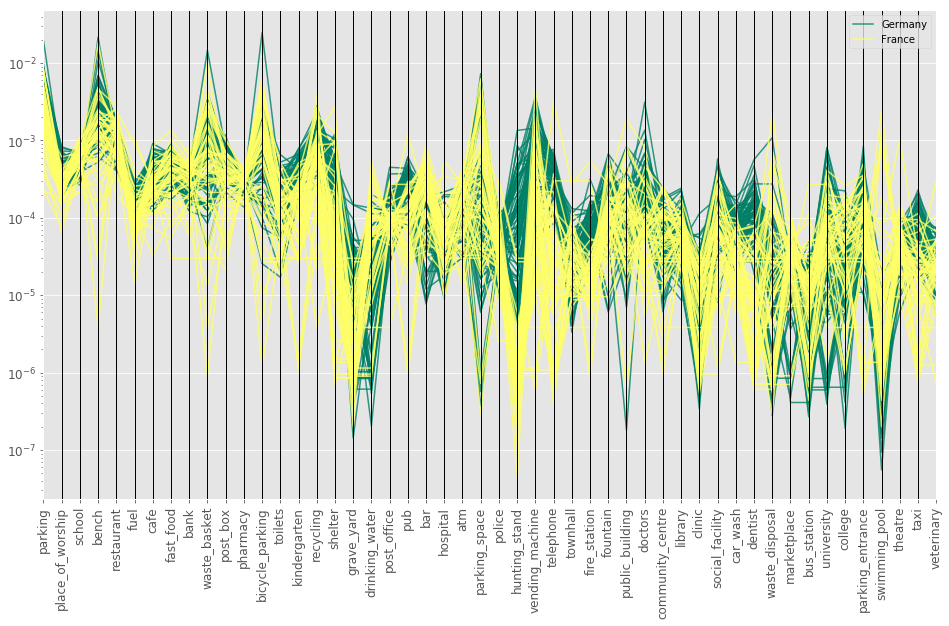 We can already see differences between German and French cities for amenities like hunting stand, vending machine, telephone, bench and a few others. Now we will apply again dimensionality reduction to our data set to see whether any relationships are visible. 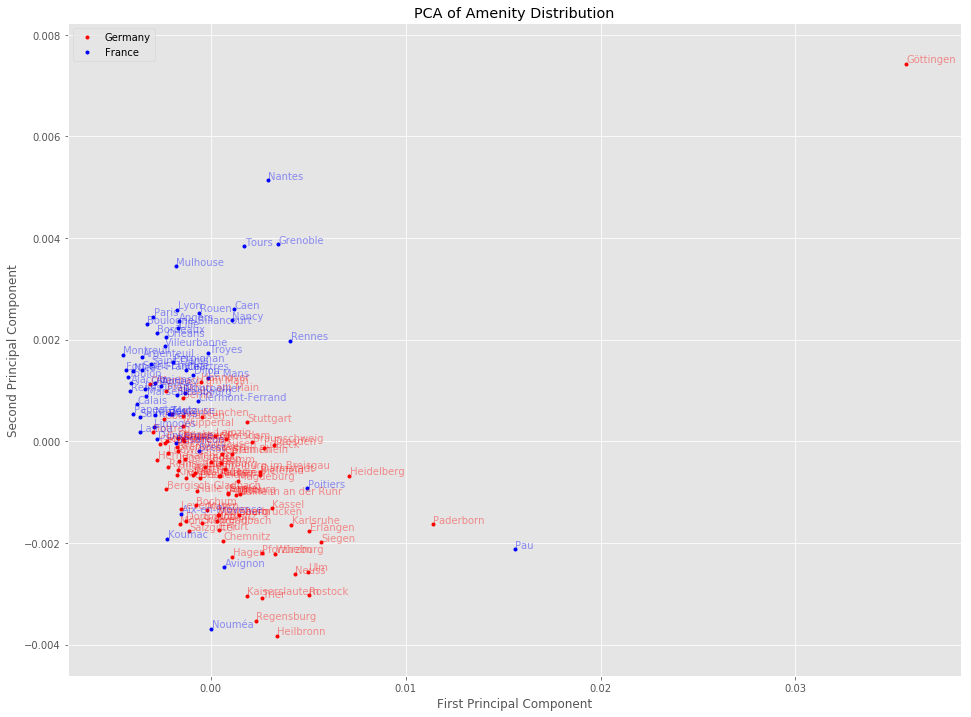 Here we already can see that German and French cities seem to exhibit differences based on their amenity distribution.

We can see that cities of the same country are close to each other, but not exclusively. This could mean that some cities share certain similarities, while others are more distinctively German or French in their amenity distribution.

We saw in this article how to compare countries and cities by using their amenities derived from OpenStreetMap. There are many paths to continue exploring. It might be worth exploring other algorithms from manifold learning. It might be interesting to extend this analysis to other countries (Keep in mind that OSM is not equally well annotated on the globe). By using the cities it might be possible to find some sort of centroid for a country which describes the country in the most distinctive way. Further, the amenity distributions might be used as feature vectors for classification of countries or cities.

All the code used for this and the previous article can be found in this repository. The previous article How to Predict Economic Indicators with OpenStreetMap covers more details on how the data was collected and other comparisons in the data. In the notebook on graphical structure, the amenities are additionally compared by correlation and graphical structure by using the Graphical Lasso algorithm.